Anticipation of a harder market and the creation of an unrestricted light-touch cohort of syndicates has resulted in an increase in the aggregate Lloyd’s market stamp capacity of 6.4 percent to £33bn ($43.6bn) for 2020.

The Insurance Insider’s annual stamp capacity survey found that overall the market is permitted to write £2bn more business for 2020 than this year.

The increase also marks a reversal of the contraction in stamp seen for 2019, when the Lloyd’s performance management directorate’s clampdown had led to the exiting of a number of classes and a tough stance on growth. Stamp for 2020 is also higher than that recorded in the 2018 survey.

Stamp capacity is the amount of sterling business a syndicate is authorised to write in a year of account. For the purposes of this survey, stamp capacity is calculated as gross of reinsurance and net of brokerage.

The measure is not a perfect indicator of the amount of business that syndicates intend to write, with carriers choosing to maintain different amounts of headroom at different points in the cycle. However, it remains a useful proxy for the business the Lloyd’s market expects to write in a given year.

This publication previously reported that planned premium growth for the market in 2020 would be a few points higher than the expected risk-adjusted rate increase of 5 percent. 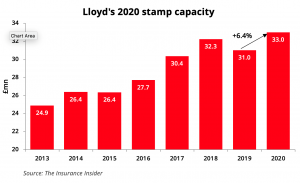 The top 10 syndicates by stamp capacity also collectively grew their stamp by 8.9 percent to £14.1bn.

The largest syndicate in the market is now Beazley’s flagship Syndicate 2623, which has grown its stamp by 19 percent year on year to £1.9bn for 2020.

Syndicate 2623 is understood to be a light-touch syndicate, one of a group of 15 which are permitted unrestricted growth due to a good track record.

As previously reported, the light-touch cohort of syndicates grew planned premium by 14 percent for 2020, compared to 3 percent for the rest of the market. 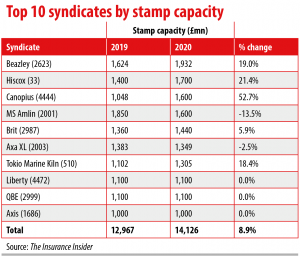 The de-emption comes after news that MS Amlin would exit nine business lines as part of remediation efforts.